Why not?
The health of the red snapper stock is not based only on the number of fish or biomass (weight) of red snapper in the Gulf. On the surface it may seem to be the practical way to make that judgment but, it’s really not the best indication of a fish stocks sustainability, or ability to reproduce for years to come. The red snapper stock is measured in terms of egg production, known as spawning potential. Larger, older fish produce many more eggs than smaller, younger fish; so counting egg production to predict the health and sustainability of a stock is more accurate than counting numbers of fish. 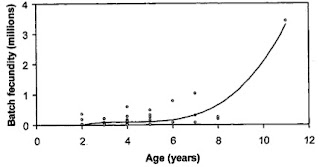 To put this spawning ability into perspective:

So, What Does This Mean?
Age and spawning success is a big part of why you’re seeing more and more fish. Unfortunately, the science isn’t giving the green light to dramatically increase the harvest. The average size of a red snapper harvested this year will weigh approximately 7.70 pounds, which is about a 7-year-old fish. It is great that fish are getting bigger and we need that trend to continue because the stock won’t be reproductively successful (considered healthy/sustainable) until we have more older, bigger fish around to spawn.

If the quota is going up every year, why does the season keep getting shorter?
There are a couple of reasons for the shrinking red snapper season. As the stock begins to rebuild we are seeing more fish than we have in recent memory, and these fish are getting bigger as time passes. Additionally, as the red snapper stock rebuilds their geographical range increases and fishermen catch them in places they have not typically been found. The more fish there are, the easier it is to catch them, and the quota is harvested faster. Even though the number of annual red snapper fishing trips has gone down, those trips are more successful, with more anglers bringing home their bag limit of big red snapper.

This year the National Marine Fisheries Service is predicting that an average of 18,922 red snapper will be landed each day during the open season, which is over three times more than the 6000 red snapper landed per day in 2007.

As the stock grows, the average size of red snapper is also increasing and there are more large fish to catch. Anglers are catching more pounds of fish per trip, even though they are keeping the same number of fish. Since fish quotas are set in pounds, the quota is filled faster with fewer individual fish. The National Maine Fisheries Service predicts that average size of red snapper harvested this year will weigh 7.70 pounds, which is about twice the weight of the typical red snapper caught in 2007.

Where do we go from here?
A benchmark stock assessment is underway and expected to be completed in June of this year. Once we have the results of the assessment the Councils scientific advisors (the Scientific and Statistical Committee) will recommend harvest levels based on the new science and Council will recommend fishery management measures to achieve those harvest goals.
at February 21, 2013

We’re getting ready for next week’s Council meeting in Mobile, Alabama.  The meeting will officially start on Tuesday, but the entire day will be closed session (not open to the public) while the Council interviews candidates for the Executive Director position.  The meeting will open to the public on Wednesday morning, and we invite you to join us either in person at the Marriott, or you can listen in live from your computer. Check out the committee agenda and the full Council agenda.

An informal question and answer session will be held Wednesday evening after the meeting; this should start around 5:30.

Public comment will be held on Thursday, February 7th from 1:15 to 5:00 p.m.
Join us and let the Council know what you think about current issues.

This meeting will be a bit different because the Council held a special reef fish committee meeting in early January. The committee will meet again next week, but it tackled some big issues in January that await final review by the full Council next week.

Some highlights from the special meeting:

The reef fish committee was presented with an analysis of the 2013 red snapper season length, including information on what may happen if states make recreational red snapper regulations that are not consistent with the federal season.

The committee requested that staff develop an Accountability Measure that gives NMFS authority to close the federal waters off of a state if that state makes rules that are inconsistent with the federal regulations.

Read the full document or watch this video to learn more about the red snapper framework.

Next week, in addition to reviewing the reef fish committees recommendations, the Council plans to tackle the following issues: 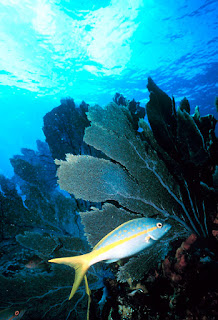 ·      Vermilion Snapper- Is not overfished or experiencing overfishing. The Council is considering changing the Annual Catch Limit for vermilion and revising the recreational bag limit.
·      Yellowtail Snapper- Is not overfished or experiencing overfishing so, the Council is considering adjusting the Annual Catch Limit.
·      Venting Tool Requirements- Current regulations mandate the possession and use of venting tools when targeting reef fish. The Council is considering changing this rule because venting may not always be necessary.
Regional Management of Red Snapper – Reef Fish Amendment 39
The Council is developing a document that explores the idea of managing the recreational red snapper quota in separate regions. At this meeting the Council will review the draft amendment and public comments received during recent scoping workshops.

Read the full scoping document, this quick guide, and watch this video about regional management.

For-Hire Days-at-Sea Pilot Program
The Council will review a scoping document that explores a possible pilot program that would allow a sample of for-hire fishermen to fish a specified number of days  or trips throughout the year instead of using the recreational season.

Electronic Reporting Requirements for Headboats
Next week the Council will review a document that considers changing the frequency and method with which headboats report their catch.

As always, if you have any questions don’t hesitate to contact us.
at February 01, 2013