The Gulf of Mexico Fishery Management Council will meet next week at the Hilton Riverside in New Orleans, Louisiana.

You’re welcome to join us in person or watch a live broadcast of the meeting. This agenda will help you figure out when the Council will be discussing the fisheries issues that interest you and, here are all the documents you'll need to follow along.

Public comment will be held from 1:00 pm  – 5:30 pm on Wednesday, August 12th. Below is a quick review of some of the issues the Council plans to address. 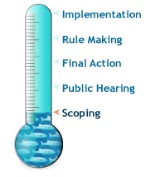 Hint: The Council reviews many different drafts of the same document before taking final action, and afterwards there are even more steps before a rule is implemented. This
thermometer shows how a document progresses through the Council process.


Red Snapper
The Council plans to take final action on Amendment 28: Red Snapper Allocation – which considers reallocating a portion of the commercial red snapper quota to the recreational sector. We encourage you to watch this quick video and send us your comments so the Council can consider your input before making a final decision.

The Council will also finalize a framework action to withhold a portion of the commercial red snapper quota in 2016. This framework will ensure that the commercial allocation that the Council intends to shift to the recreational sector is available in 2016 even if the amendment isn’t implemented until after individual fishing quota is distributed among commercial fishermen.

The Council will review revised alternatives in Amendment 39: Regional Management – which considers dividing the recreational red snapper quota among different regions in the Gulf to allow for the creation of different management measures that best suit each area.

The Council will also review a draft of Amendment 41 - which considers creating a management plan for federally permitted for-hire vessels fishing for red snapper. The options paper includes both charter vessels and headboats fishing under the for-hire component of the recreational red snapper allocation.

Data Collection
The Council will review a public hearing draft of an amendment being developed jointly between the Gulf and South Atlantic Councils, that considers modifying the frequency and method of reporting for charter and headboats fishing for reef fish and coastal migratory pelagics in the Gulf of Mexico, and snapper, grouper, dolphin, wahoo, and coastal migratory pelagics in the South Atlantic.

The Council will also review an options paper for Amendment 42 - which considers creating a management plan for federally permitted headboats fishing for reef fish in the Gulf of Mexico. The document considers which species to include, and how to manage the fishery.

Mackerel
At its June meeting, the Council reviewed input received during the scoping workshops for coastal migratory pelagic Amendments 26 and 28. Next week, the Council will review the options papers developed using the input from those workshops. Amendment 26 considers making modifications to allocations, stock boundaries and sale provisions of king mackerel, and Amendment 28 considers separating permits for Gulf and Atlantic king and Spanish mackerel.


Shrimp
The Council will review a draft options paper for Shrimp Amendment 17 – which considers what to do about the pending expiration of the federal shrimp permit moratorium.