Artificial reefs and their link to the Gulf fisheries has been a hot topic for the past few years. Scientists debate whether artificial reefs increase fish populations by expanding habitat opportunity or simply attract fish from other, less desirable habitat. It’s been difficult to determine which viewpoint is correct because artificial reef structures only account for about 1% of all hard bottom habitat in the Gulf. In either case, the Gulf of Mexico Fishery Management Council is concerned about the method and rate of oil and gas platform removal because the structures define the way people fish in some parts of the Gulf.

In recent years, the installation of new gas and oil structures has slowed. Additionally, the U.S. Department of Interior created the Idle Iron policy which requires all oil and gas structures to be removed no longer than a year after production is finished. Fishermen and conservation groups are concerned that the demolition and removal of rigs will harm our fisheries. Unfortunately, the Gulf Council has no authority to control the removal of rigs in the Gulf, which are under control of the Department of Interior. The Council has sent a series of letters asking the agencies responsible for rig removal to reconsider the use of explosives to remove rigs because explosives are known to kill fish dwelling near those structures. The Council has also asked that the rate of rig removal be  slowed or discontinued until more information is gathered regarding the effects of structure removal on the fishery.  The letters can be viewed here. 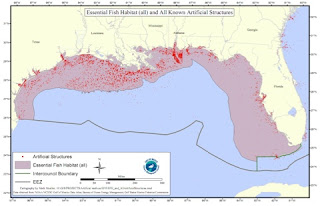 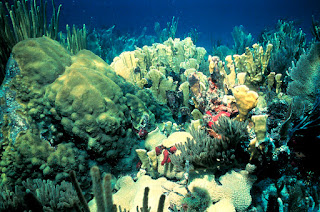 The Council plans to discuss an amendment that considers designating artificial reefs as Essential Fish Habitat at the next meeting, which is scheduled for June 18 – 21 in Tampa, FL.
at June 05, 2012